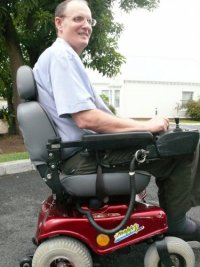 Sleek, streamlined, sporty, Ferrari red. Wheels to take you places. The latest sports model in Car magazine? No, it’s a Shoprider Snappy electric wheelchair, but to Malcolm Lightbody of Somerset West it’s as desirable as any top of the range racing car.

Malcolm has Multiple Sclerosis, a condition which affects the brain and spinal cord. It damages the myelin sheath, the material that surrounds and protects the nerve cells, slowing down messages between his brain and his body. While MS takes many forms, for most people it is a slow and relentless slide into physical and cognitive disability. Malcolm has also had to come to terms with the fact that there is no known cure for MS – this is a life sentence. But it is one he bears with great fortitude, helped in part by a loving friendship and, in recent weeks, by the new wheels in his life!

Malcolm was diagnosed with MS in 1998 when he was 43 years old. Since then he has travelled a long journey investigating various cures and therapies, battling depression and coping with the loss, not only of his physical abilities, but also of the support of some family and loved ones. In the midst of his darkest times in 2006 he received an email from a fellow MS patient, Gail Keanly, who lives at Huis Marie Louw in Somerset West. Gail’s experience of the disease is longer and more severe than Malcolm’s and her wisdom and courage proved to be an inspiration for him. They began to correspond regularly and after two years they met for the first time when Malcolm came to Cape Town from Gauteng for the wedding of Gail’s daughter. The friendship blossomed during his visit and a few months later Malcolm also moved into Huis Marie Louw, which he describes as being a place of great compassion and care.

While both are wheelchair-bound, they are certainly not house-bound! Malcolm and Gail love to be independent and try to get out and about as much as they can. Trips to the local shops and to Somerset Mall are a happy feature of their lives, but both agree that the highlight of the week is the Wednesday morning outing to the Day Hospice meeting at Helderberg Hospice. Here they are part of a group of others living with long term illnesses like Motor Neurone Disease and cancer, but the time at Hospice is a time for them to be people, not just patients. “The Day Hospice is brilliant,” says Malcolm, “and the group members there have become like family to me.”

It was at Hospice that Malcolm’s need for an electric wheelchair was first noticed. Operating a manual wheelchair requires significant strength and effort, and can be a considerable physical strain for someone with MS. Sister Val Rens, head of Nursing Services at Helderberg Hospice, set about finding a suitable chair for Malcolm and was able to successfully negotiate the use of a chair owned by the Motor Neurone Disease Association. After a service and puncture repair, the wheelchair (plus crash helmet and knee pads!) was presented to Malcolm at a special ceremony at the Day Hospice. According to Sr Rens, “Malcolm’s face lit up like a Christmas tree” when he first took the control lever in his hand and the machine responded immediately, turning on the proverbial tickey with a soft whirring sound. “This wheelchair makes all the difference to the way I can get around and be independent,” declared Malcolm, “and now I can keep up with Gail, who’s been driving one of these for years!”

This story illustrates the special kind of care that Helderberg Hospice is known for, a care that encompasses the whole person and that aims to enhance life for as long as possible.

Respite Care is for All Seasons

Take me the contributions page
×
×