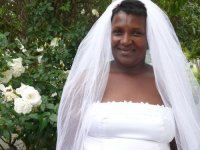 2011 is the year for weddings; for brides to walk down the aisle and become princesses. But we all know that every bride is a princess on her wedding day. Maybe the dress is hired and has no designer label, maybe the neighbour did her hair and a friend took the photographs, but every woman on her wedding day, royal or not, is radiantly beautiful in her own way.

And every wedding tells a story. Sometimes it’s the dream-come-true fairy tale story of a commoner who meets a prince, sometimes it’s the boy next door who gets his girl – and sometimes it’s what you do because it’s one of the last things you’ll do and you know it’s the right thing to do.

This is a story set in poverty. You may wish to hope, because many fairy tales have their beginnings in this setting, that this might be a rags-to-riches story, but you will be disappointed. The bride and groom both come from a low-cost housing area, where unemployment and crime are the ragged, ever-present neighbours in the treeless streets of row upon row of identical houses and blocks of apartments. The grinding reality of poverty is that it is frequently undergirded by disease, and for some, a disease without cure. At Helderberg Hospice we say that where there is no longer a cure, we have a special way to care, and sometimes that care includes more than just medication – it means helping to make dreams come true, even dreams of a beautiful dress of satin and lace…

Lorraine personifies the message that a diagnosis of HIV does not have to be a death sentence. First referred to Helderberg Hospice in 2002 as a patient with a poor prognosis, she has been able to maintain a good quality of health and life and has been an active member of the Hospice support group in her area. The relentless track of the disease meant that she had to go onto anti-retroviral treatment two years ago, but her compliance with the medication regime coupled with prudent lifestyle choices, has given her the opportunity to enjoy a level of health many would have thought impossible when she first came onto the Hospice programme. She has even been able to give birth to a daughter, who with the benefit of the State programme to prevent the mother-to-child transmission of HIV/Aids, is healthy and free of the disease. And also the reason for the wedding plans…

Lorraine’s partner of the last six years is Mervin and his story is a very different one to that of hers. He too faces a life-threatening disease, but one with potentially a very different outcome to HIV/Aids. TB can be cured but only if the patient completes the treatment programme of many months and takes care to live a healthy lifestyle. TB and HIV/Aids are sinister allies, with the latter making fertile ground for the former and it is frequently the complications of TB that cause death for the immune-compromised HIV patient. Mervin is a man who, like many, thought he could beat TB his own way and he repeatedly defaulted on his medication, to the point that the virus has become resistant to the barrage of drugs that seek to restore his ragged health. The file at the TB clinic that bears Mervin’s name has the terrible letters XDR printed boldly on it – Extreme Drug Resistant. The extent of Mervin’s disease is such that he can no longer live at home. He has been placed in a TB treatment centre in Cape Town where he awaits what will be the inevitable end of his life. After his admission there, Mervin realized that what he really wanted to do, more than anything else, was to be married to Lorraine and be the legal father to his daughter.

And so, a wedding was organized – family, friends and neighbours came together to make a day of special importance for this couple. Mervin was able to come home for the weekend; Lorraine had her hair done and donned the dress of her dreams. They became a prince and princess for the day, bound by their promises to love as long as they live.

It is remarkable that in all the time that Mervin gambled with his health, Lorraine steadfastly stuck with her life-giving regime of medication, good nutrition and careful lifestyle choices. One of the major differences in their lives is the role that Helderberg Hospice has played. Lorraine, as an HIV+ patient with an initially poor prognosis, was referred early on for counselling and support, but TB patients are not referred to Hospice until they are deemed incurable and are on death’s door. The care of Helderberg Hospice has made the difference for Lorraine. It is the difference between life and death.

PBO – means means a public benefit organisation as defined in paragraph (a)(i) of the definition of “public benefit organisation” in section 30(1), which is constituted as either a non-profit company as defined in section 1 of the Companies Act 71 of 2008, trust or an association of ersons that has been incorporated, formed or established in South Africa, and approved by the Commissioner under section 30(3).

Section 18A – means the section that provides for the tax-deductibility of
donations made to section 18A-approved organisations carrying on PBAs in Part II in South Africa.

Section 18A-approved organisation – means any PBO contemplated in paragraph (a)(i) of the definition of “public benefit organisation” in section 30(1), and any institution, board or body, agency or the government which carries on PBAs in Part II in South Africa, and which has been approved by the Commissioner under section 18A.

Section 18A receipt” means a special prescribed receipt issued under section 18A by a section 18A-approved organisation entitling the donor to a tax deduction for bona fide donations made.

18A.” The following payments or transfers do not qualify for a deduction under section 18A: